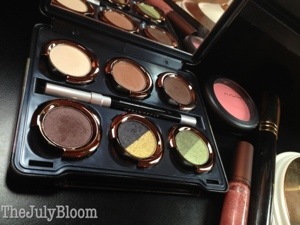 This is not a new palette, it was launched before the movie Oz the Great and Powerful showed in theaters. The idea of this palette is to suit the witch Theodora which she had an amazing makeup in the movie (not when she turned green :-D). She was wearing a smokey brown on her eyes and red lips.

Now this palette (Theodora) has all those beautiful brown shades which i mostly use along with the ivory color, i rarely use the duo colors, only when needed. Those eyeshadows are removable, and i believe those are the same as the recently launched empty palettes also by Urban Decay and you can fill them with the eyeshadows you choose.

The palette also contain a black liner and a lip/gloss pen in red (not shown in picture).

The palette is a Limited Edition, and there is another one named after the other good witch which is called Glinda.